Graduating from Michigan Technological University with a degree in Mechanical Engineering in the early 1990’s, Adam began designing industrial and mobile heavy equipment. In 2008 while working at Barko Hydraulics as a Project Engineer, he got a phone call from Exodus Machine’s co-founder and president, Bruce Bacon.

Bruce’s excitement over the start-up company that would be making Material Handlers for the scrap industry was contagious. Adam realized he had an opportunity to be a part of something special. After meeting with the founders of Exodus Machines, Adam became the first employee. He was hired to oversee the development of the Exodus Material Handlers, which would be the most productive material handlers in their size class.

A family-owned and operated company.

Adam has assumed additional responsibilities as the company has grown, which now includes overseeing the entire engineering team for all of Exodus Machines’ companies – BladeCore, Connect Work Tools, OilQuickUSA and ShearCore.  Adam manages the overall projects, priorities, and resources for the engineering department. In addition, he supports the service for the core products and the legacy material handlers.

Build long-term relationships with our customers

Exodus is a special place to be – it was founded as a family owned and operated company with a simple belief “put your customer and employees as a priority for making decisions.” When you take care of your employees, they take care of the company. When you talk with the engineers that work with Adam, it is clear that he embodies those core values in every interaction with his co-workers and customers.

Adam will tell you that building relationships with customers, builds long-term business that is mutually beneficial for Exodus and for our customers.

A family man at heart.

Adam is married to his wife Marcy, a kindergarten teacher in the Superior School District, who has taught him “Everything he NEEDS to know.” They have three beautiful daughters. Johannah and her husband, Nick live in Hawaii and are expecting their first child (and Adam’s first grandchild) in December. Lydia, their middle daughter, recently graduated from Northwestern High School and has enlisted in the Air National Guard. They are relishing in their last few months together before she heads out for basic training. Their youngest daughter, Ivy is a freshman in high school and is most likely to follow in her dad’s footsteps. Although she has said that she doesn’t plan to work FOR her dad but intends to be her dad’s BOSS. (I’m guessing she probably already is 😊).

When Adam isn’t working, he enjoys fixing things – mostly his house, cabin or Farmall H (which I learned was a tractor in case you’re wondering). He enjoys spending quality time with his family at the cabin – fishing, swimming, taking Jeep rides and relaxing around the campfire. The family enjoys traveling together and exploring the outdoors. He and his girls also enjoy hunting in their backyard – or as they refer to it, “their back 40.”

He is a man of faith with great love of our country and pride in his family.

Adam continues to explore how to make our attachments better and inspires his team to do the same. We are grateful that Adam said yes to Bruce years ago and for all his contributions he has made to the industry. 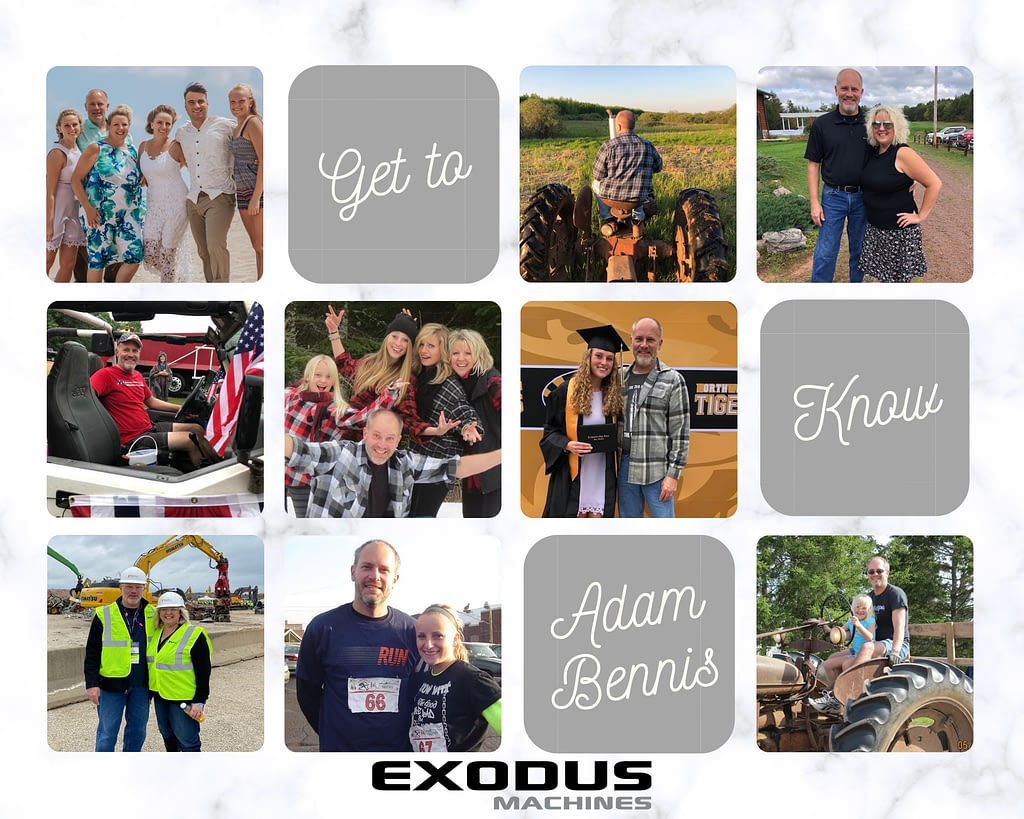